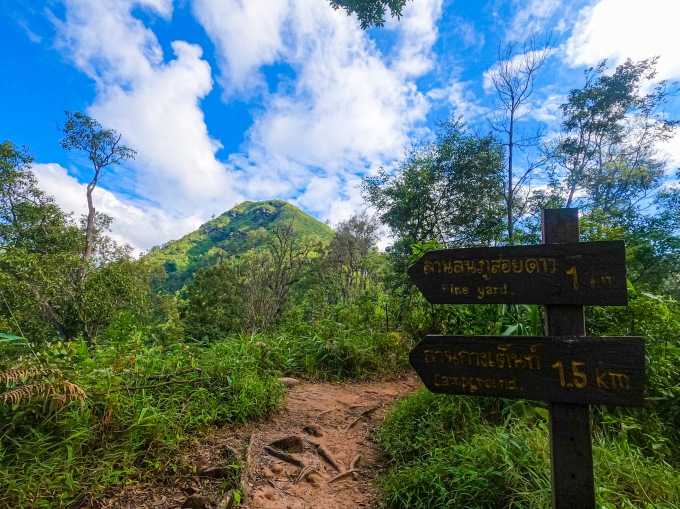 My eyes followed the droplets rolling down my bedroom window, but as the darkness began to engulf my entire room followed by a roaring thunder as if calling for a melancholic sentiment, I jumped out of bed and grabbed my laptop. This is it! The moment has come.

Despite knowing that a torrential rain was coming, I booked an appointment at the national park headquarters through QueQ because the rainy season is the best time to conquer Phu Soi Dao Mountain!

I spent the following days readying for the camp: buying raincoats and camping gear, booking for a tent rental (coz I don’t have one), buying a return ticket from Uttaradit province, and conditioning my body at the gym. According to the website, it’ll take 7-8 hours trek average so I have to make sure that I’ll make it to the summit. The thing is, I’ve been partying a lot days before the climb which was absolutely a bad idea, but what made this trip worse was that, what I thought as the shorter route to the base of the mountain turned out to be the most inconvenient for the lack of public transport. But blessings in disguise do come because the songthaew that we took from the city proper to Nam Phat District (1 hr and 30 mins journey) stopped in front of an eatery and the lady there informed us that there was no bus available, that people who wanted to climb Phu Soi Dao actually did it from Phitsanulok, then called someone who owns a pick-up truck that we could rent for THB2200 (to and fro).

Seeing that it was already 9am, my heart was filled with worry. We had an 8am appointment at the headquarters and it would take another 1 hour and 45 mins to get there from where we were. Moreover, if we started the climb late, we would reach the camping ground just as late. We didn’t want to trek in the dark of an unfamiliar terrain. Realising that, Mr. Tunwa (our driver) drove fast to the headquarters, guiding us through and through and even bought bottled water for us to ensure that we had something to drink and to use for cooking when we reached there. The porter carried the tents for THB30/kg then we kept moving at 11am.

As my mobile signal dropped, peace began to fill me, and so as wonder. Step by step we walked and there was nothing else to hear but the rushing water from the nearby river and the occasional chirping of crickets.

The first quarter of the ascend was fine but as we elevated, the steps got steeper, and we had to climb or crawl literally. There was a resting area per station and I really appreciated that the benches were high enough so I could place my heavy overhead bag easily and breathe. Then, we continued. We were gasping for air and our stomachs growling when we realised that we did not eat lunch and all we had in our bags were 2L water, chocolate bars, and some oreos.

We walked for hours until we reached a sign that said “1.5km for camp ground” but as we looked ahead, we couldn’t help but laugh because the remaining 1.5km was actually a slope going to the top of the ridge. Oh God!

Step after step, we climbed and climbed and walked and walked with a few minutes break in between, until I saw smoke coming from the woods. Camping ground! We walked even faster with a smile plastered on our lips.

We reached the camp site around 4pm after walking 5 hrs and 30 mins. I guess we can proudly say that we beat the 7-8 hrs average. Yay! The porters and rangers cheered when they saw us, saying “Kaeng raeng!” which meant ‘good strength’ in Thai, then helped us pitch our tents. 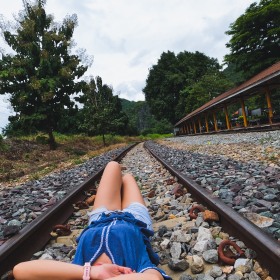